Viral infections always threaten human life and public health safety,and have a serious impact on social stability and economic development. Whether it is chronic infectious diseases such as AIDS and hepatitis B, or sudden infectious diseases such as novel coronavirus pneumonia (e.g. COVID-19), antiviral drugs with high-efficiency, low-toxic and anti-drug resistant are still unmet major clinical needs.The lab of Prof. Liu Xinyong in Shandong Universityrelies on scientific research platforms such as the China−Belgium Collaborative Research Center for Innovative Antiviral Drugs of Shandong Province and the Key Laboratory of Chemical Biology (Ministry of Education), and aims at solving the key scientific issues in the field of antiviral drug research, with the continuous support of key international cooperation projects and general projects of the Ministry of Science and Technology, National Natural Science Foundation of China and key innovation projects of Shandong Province, etc., on the one hand, they have found new antiviral lead compounds with new structures and mechanisms to provide strategic reserves for drug development; on the other hand, they have also discovered a new generation of highly effective anti-drug resistance candidates through structural optimization of marketed drugs. Based on recent research results, they have been published 3 articles in the Journal of Medicinal Chemistry, the top journal of medicinal chemistry worldwide.

The discovery of inhibitors with new targets and new mechanism can fundamentally overcome the problem of drug resistance of existing clinical antiviral drugs. Capsid protein (CA) plays an important role in the early and late stages of the HIV-1 replication cycle. At the same time, mature CA can also protect the internal viral genes from external damage, so CA becomes anti-HIV-1 new target for drug research.

The above results show the prospects for research and development of anti-AIDS drugs targeting HIV-1 CA. With the continuous deepening of globalization and the increasingly close exchanges between people in various countries and regions, the spread of HIV-1/HIV-2 is bound to gradually expand. Because11lhas efficient dual inhibition of HIV-1/HIV-2, it can be a promising lead for further optimization. 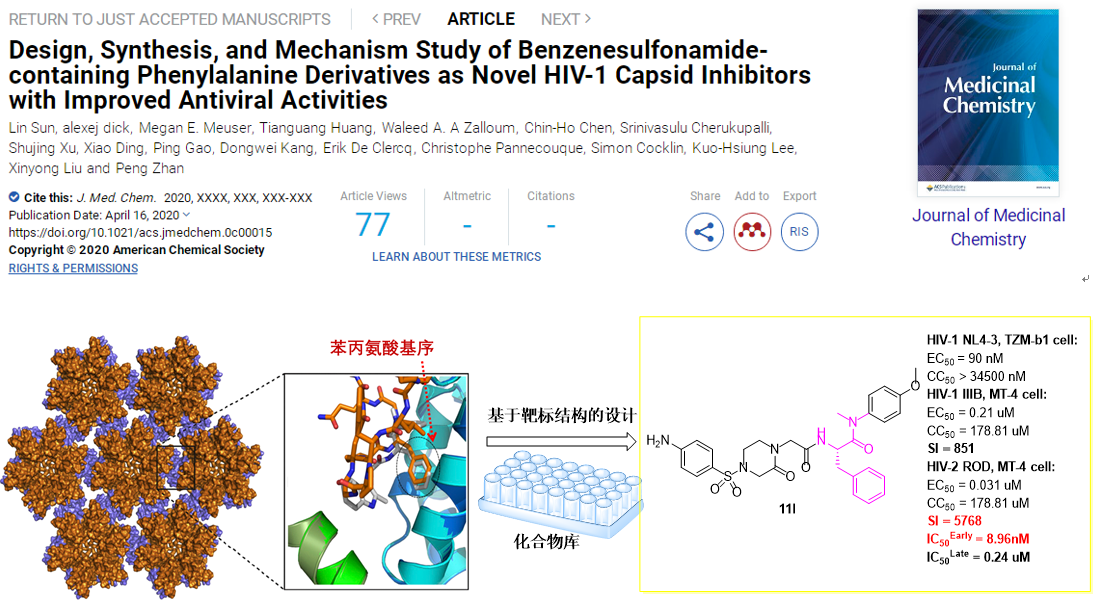 The above research results have been published online in the Journal of Medicinal Chemistry (J Med Chem. 2020 Apr 16. doi: 10.1021/acs.jmedchem.0c00015.). The first author is a doctoral studentLin Sunof Shandong University,Prof. Liu Xinyong , Associate Professor Zhan Peng ,Prof.Kuo-Hsiung Leeof the University of North Carolina and Prof.Simon Cocklinof Drexel University are co-corresponding authors of this paper. This work has applied for several Chinese invention patents.

HIV-1 non-nucleoside reverse transcriptase inhibitors (NNRTIs) have the advantages of high efficiency and low toxicity, and are an important part of cART therapy. However, the development of efficacious NNRTIs for AIDS therapy commonly encountered the rapid generation of drug-resistant mutations, which becomes a major impediment to effective anti-HIV treatment.

Using a structure-based bioisosterism strategy, series of DAPY derivatives were designed and synthesized by Prof. Liu’s team. Compound 9a and 24b yielded the greatest potency, exhibiting significantly better anti-HIV-1 activity than ETR against all the tested NNRTI-resistant HIV-1 strain. Moreover,24b showed significantly lower cytotoxicity (CC50> 155 μM), and reduced hERG inhibition (IC50> 30 μM). In addition, the phenotypic (cross)-resistance of 9a and other NRTIs to the different selected HIV-1 strains were evaluated. As expected, no phenotypic cross-resistance against the NRTIs (AZT and PMPA) were observed with the mutant strains 9ares strain. Furthermore,9a was identified with improved solubility, lower CYP liability and hERG inhibition. Remarkably,9aexhibited optimal pharmacokinetic properties in rats (F= 37.06 %) and safety in mice (LD50> 2000 mg/kg), which highlights 9a as a promising anti-HIV-1 drug candidate and are expected to be used as a component of cART therapy in combination with NRTIs for the treatment of AIDS. 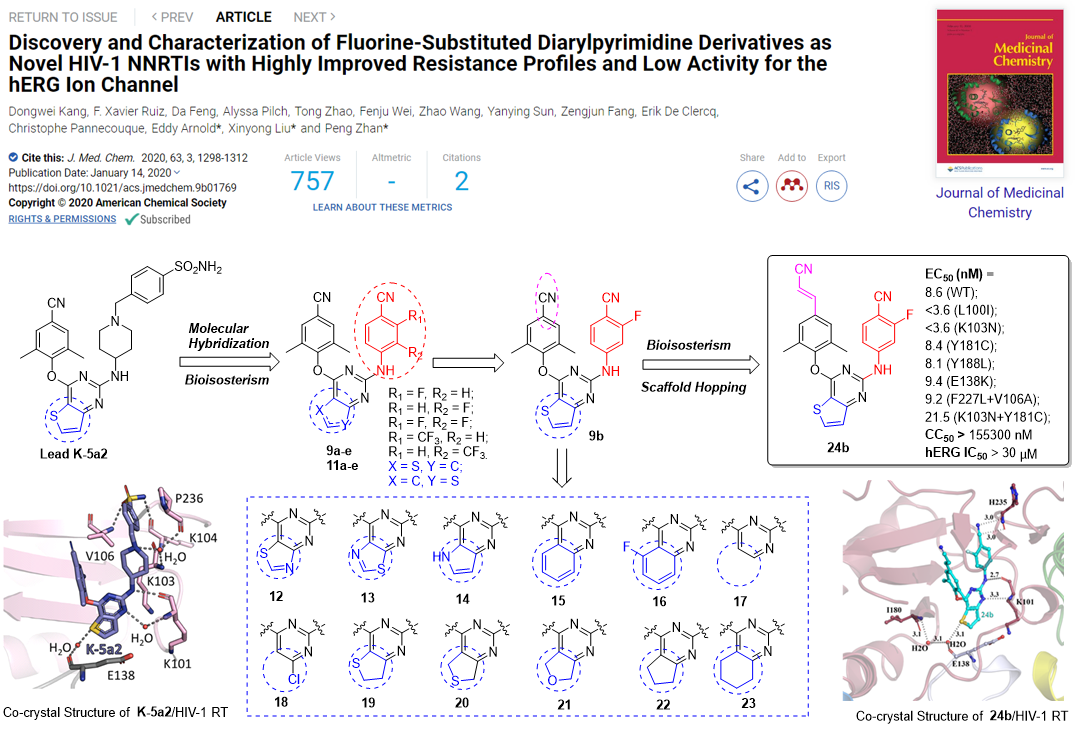 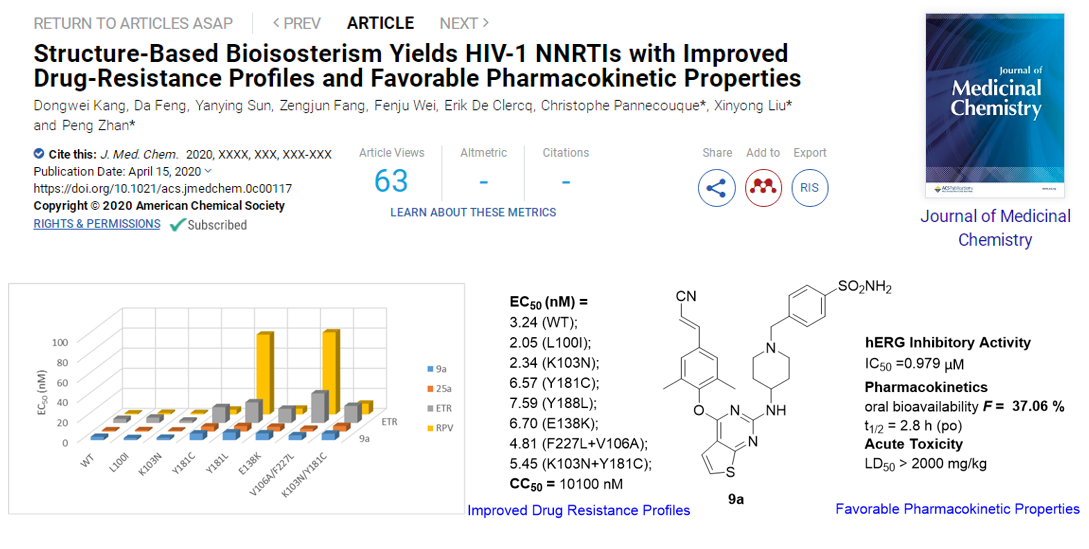 The above research results have been continuously published online in the Journal of Medicinal Chemistry(J Med Chem. 2020, 63, 1298-1312; J Med Chem. 2020 Apr 15. doi: 10.1021 / acs.jmedchem.0c00117.). The first author of both articles is postdoctoralDongwei Kang;Prof.Liu Xinyong and Zhan Peng  of Shandong University are co-corresponding authors of both articles;Prof. Eddy Arnold of Rutgers University and Prof. Christophe Pannecouque of K.U. Leuven are co-corresponding authors of two papers, respectively.