After the COVID-19 outbreak, the name ECMO (Extracorporeal Membrane Oxygenation)has caught the eyes of the public. Regarded as the last resorts to save severe COVID-19 patients, ECMO is used to sustain breathing for patients with severe cardio-pulmonary failure by providing continuousextracorporealrespiratory and circulatory assistance. As a top-level life-supporting equipment, ECMO is seen rather expensive and rare worldwide. There are only around 400 ECMOs in China, which are all imported from abroad.

Professor Liu Shuqin and her Team in Shandong University announced recently their success in developing a proto-type ECMO equipment. Professor Liu is Director of Maglev Engineering Research Center of the School of Electrical Engineering, Shandong University. Since 2008, the team has been studying the maglev artificial heart pump－the core component of ECMO. After more than ten years of conscientious research, her team has made breakthroughs in this direction with technologies of independent intellectual property rights, and now they are seeking cooperation to incubate the technology into real products. It is expected to save more lives of severe patients with the assistance of ECMO. 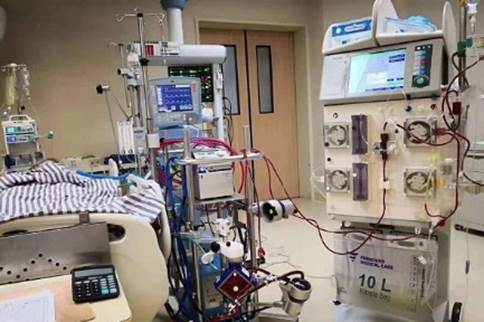 Also known as "mobile artificial heart-lung apparatus", ECMO is a kind of Extracorporeal Membrane Oxygenation technology for sustaining lives of patients with acute or severe cardio-pulmonary failure. ECMO basically works by pumping out the patient's venous blood with a power pump (artificial heart), oxygenating the venous blood while discharging carbon dioxide through its membrane lung (artificial lung) and then again pumping the blood back into the patient's body. Although ECMO has no curing effects on the infection caused by COVID-19, it provides effective gaseous exchange and functions as a substitute heart-and-lung system for critically ill patients by relieving their dyspnea－a sequela caused by the COVID-19’s attacking the lung of human beings. Thus ECMO is regarded as a "life-saving device" enabling medical workers to race against time in patients’ cure and rehabilitation. 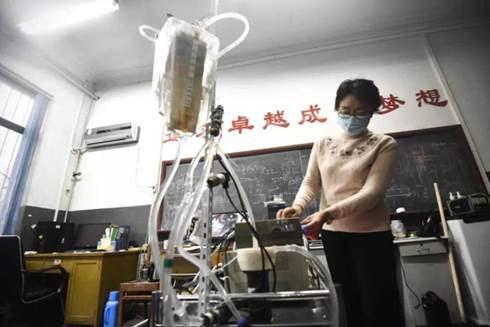 According to Professor Liu Shuqin, the Maglev Engineering Research Center of Shandong University is one of the earliest research institutes in China to conduct research on maglev technology and has already accumulated rich experience in its theoretical research and technology development. After more than ten years of strenuous efforts, the team of 16 members, with professional backgrounds covering electric engineering, computer technology, mechanics, fluid engineering, materials, chemistry, emergency medicine, cardiac surgery, intensive care medicine, etc., has independently developed an ECMO prototype. Adopting the maglev magnetic suspension technology, this equipment is characterized by low hemolysis, a sufficient pressure buffer, easy flow regulation, high safety reliability, small size, etc. Up till now, the team has already carried out blood tests on animals. Parameters and indexes of the equipment have reached advanced world level.

This equipment is expected to cut the prices of ECMO by one third. At present, each ECMO equipment costs 1.5 to 2 million yuan, in addition to working consumables from 40,000 to 60,000 yuan. Accoding to Professor Liu Shuqin, if this China-made ECMO equipment is produced on large scale, then the cost of each set of ECMO equipment and its consumables may drop to about 1 million yuan and 30,000 yuan respectively. Cost reduction would promote wider availability of ECMO and benefits more patients.

In the reliability test, four centrifugal pumps of the ECMO prototype have been running smoothly for 15 consecutive days without failure. In the blood substitute (diluted glycerin) and blood tests, their performances have reached the international advanced level. Besides, the pump connector could be joined to imported equipment and even completely replace the imported ones given its excellent performance. At present, three patents for new inventions have been submitted for the maglev centrifugal pump two of them have been authorized and one is going through material review.

"We hope that equipment manufacturing enterprises and medical institutions contact us as soon as possible so as to incubate our technology into products and make ECMO affordable to more patients in the near future," Professor Liu said. After the ECMO prototype came out, many companies in Shenzhen, Shanghai, Beijing, Chengdu and other cities in China have already expressed their interests for cooperation.

According to Professor Liu, the current COVID-19 epidemic has become a severe challenge worldwide. The researchers hope the production of autonomous ECMO equipment could provide help to people in urgent needs around the world.

Up to now, the team have already undertaken many national and provincial level research projects for maglev artificial heart pumps. They have obtained 9 invention patents and 3 utility model patents related to their artificial heart pump; and more than 100 papers have been published on this topic.