In 2019, the United Nations called for more ambitious climate action to prevent catastrophic climate change. Decarbonizing our energy systems is one of the most important actions we can take. In response, many countries have developed ambitious plans to expand wind power. However, these ambitious goals cannot be achieved without the large deployment of high-performance onshore and offshore wind turbines, which heavily rely on critical minerals, particularly rare-earth elements (REs) (mainly neodymium [Nd], praseodymium[Pr], and dysprosium [Dy]), for the production of permanent magnet electric generators. Those REs are critical to the efficiency and market competitiveness of wind turbines, but they are relatively scarce and experiencing a vulnerable global supply chain when the whole world is relying on the production from only a few countries. Several initial investigations have attempted to address such conflicts to meet wind-power development targets in several countries. For instance, Fishman and Graedel (Nat. Sustain. 2019, 2, 332) found that there will be a shortage of Nd for the delivery of United States offshore wind-power targets even if the REs in retired turbines are well recycled. Such RE mineral constraints could be more severe for global wind expansion. Preliminary investigations have emerged in several system-wide studies focusing on the entire global energy system. However, there is a lack of dynamic, spatial, and technology-specific investigation of each region toward the designed wind-power roadmaps.

To fill these knowledge gaps, we carry out a comprehensive evaluation of whether the supply of REs can keep up with global wind-power pathways as required by different climate targets,in which specific factors from regional, technical and material perspectives are considered. 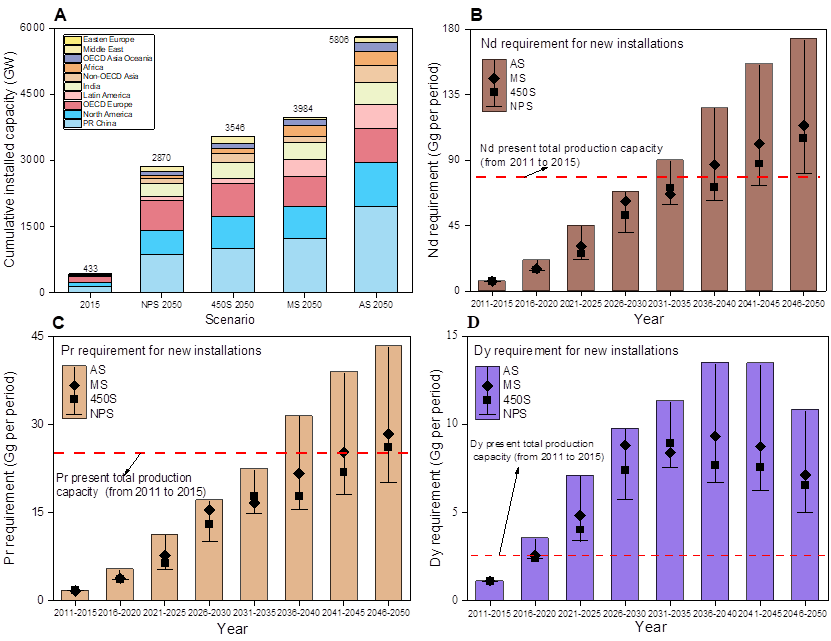 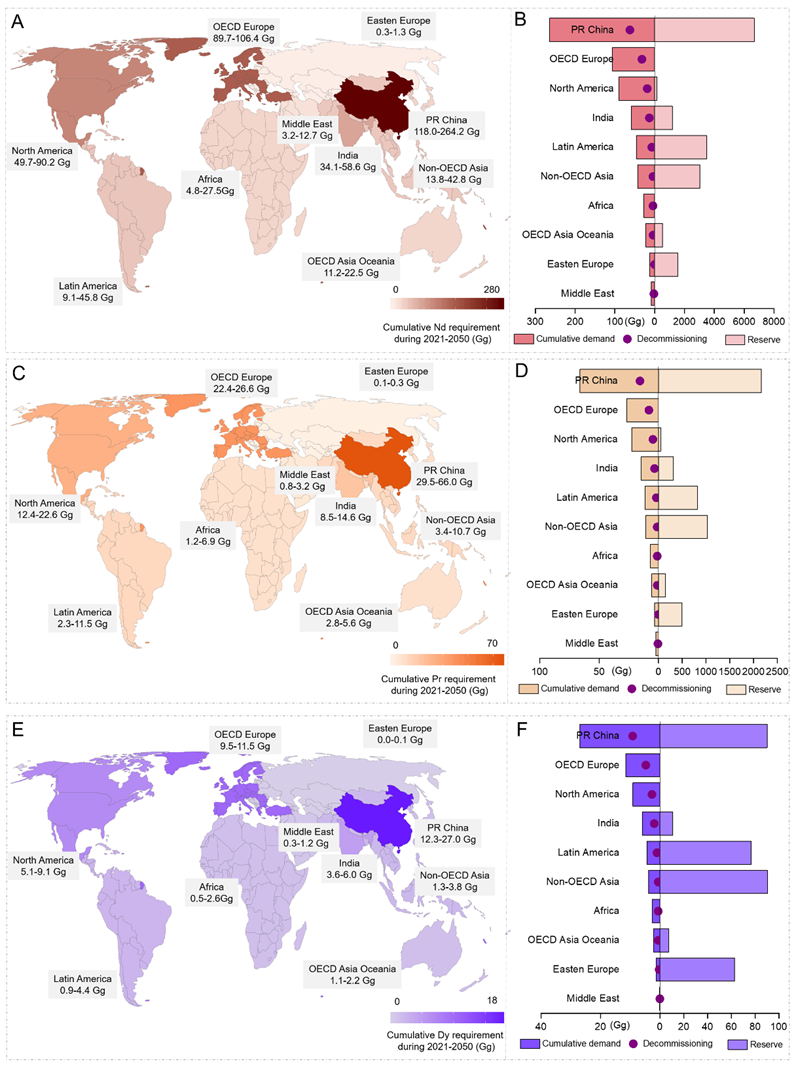 Our results show that global cumulative demand for REs is estimated to be in the range of 459.7-902.4 Gg, including 339.7-668.0 Gg for Nd, 84.9-167.0 Gg for Pr, and 35.1-67.5 Gg for Dy (Figure 1). Compared with that in 2011-2015, the cumulative demand for REs in the global wind power industry will increase by 11-26 times in 2046-2050. Notably, the demand for REs is much higher than current REs production, implying the future potential shortage of REs to meet the ambitious wind-power-development goals without rapid expansion of the RE production capacity.

We also find that there are obvious regional differences in the demand for REs in the wind power industry (Figure 2). China’s demand for REs will be the largest (over one-third of the global total) under all four wind-power scenarios given its leading position in projected installation capacities. Nevertheless, China’s wind-power deployment could still face a RE shortage posed by its production quota given that the production capacity of REs in 2046–2050 must be expanded by 6–15 times their production level in 2011–2015 to meet its wind-power targets. As the second-largest consumer of REs related to wind power, OECD Europe has a limited amount of RE reserves and very low production capacity, making the region highly dependent on the import of REs (especially from China) and their related products for their wind-turbine production. Given that offshore wind technology is more reliant on REs, the wind-power pathway chosen by OECD Europe will face a higher risk of RE shortage. For each scenario, Eastern Europe’s demand for Nd, Pr, and Dy accounts for only 0.1% of their reserves. Thus, Eastern Europe might be able to become a potential source of REs to sustain global wind power development.

Material recycling and efficiency, production expansion, and technical innovation are promising for alleviating RE supply shortages in the long term. For example, over the next three decades, if all decommissioned REs are recycled and reused, 22.1%–25.9% of Nd demand, 22.1%–25.9% of Pr demand, and 31.8%–37.1% of Dy demand could be met (Figure 2). However, the existing global RE supply structure, along with the intensifying geopolitical and environmental constraints, could inhibit the rapid expansion of wind power, which calls for global cooperation to foster a sustainable and responsible RE supply chain.