Recently, in collaboration with Prof. Guillermo Montoya’s group from the University of Copenhagen, Denmark, Prof. She Qunxin’s laboratory from State Key Laboratory of Microbial Technology, Shandong University, published a research article in the Molecular Cell Journal, which is entitled as “Structure of the Cmr-β Complex Reveal the Regulation of the Immunity Mechanism of Type III-B CRISPR-Cas”. Feng Mingxia, a postdoc in Qunxin’s group at Shandong University, and Nicholas Sofos, a postdoc in Guillermo’s group, are the co-first authors.

CRISPR-Cas systems are the adaptive immunity systems that employed by most archaea and half of bacteria to defend themselves against invasion of viruses or plasmids in a small RNA-guided fashion. Based on the signature Cas proteins， CRISPR-Cas systems have been divided into two broad classes (Class 1 and 2), of which each containing 3 main types.

Type III CRISPR-Cas systems consisting of subtype A-F are unique as they exhibit multiple activities which are target RNA cleavage, RNA-activated ssDNA cleavage and synthesize cyclic oligoadenylates (cOA), a second messenger that activates CRISPR associated proteins of the Csm6/Csx1 superfamily for cellular RNA degradation. Subtype III-A (Csm) and III-B (Cmr) are the best characterized. The former has been studied to reveal the mechanistic details of its recognition between invading and self DNA, while it still lacks a full understanding of the latter. 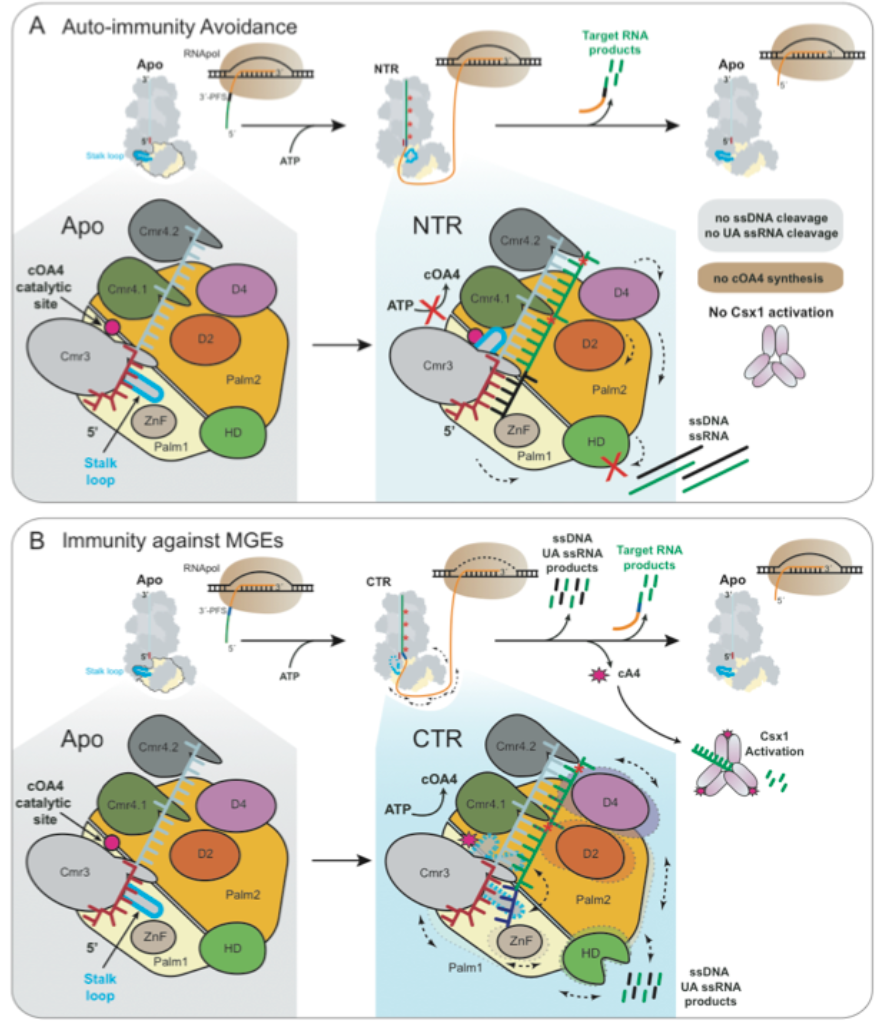 In this study, the authors have revealed that Sulfolobus islandicus encodes Cmr-b, a unique IIIB CRISPR-Cas with 7 different Cas subunits. This antiviral system is novel since it represents the only CRISPR immune system that exhibits four distinctive activities, including the backbone RNA cleavage, the RNA-activated DNA cleavage, the RNA-activated UA RNA cleavage and the synthesis of cyclic oligoadenylates, a secondary signal that activates robust RNases of Csx1/Csm6 family, all of which contribute to the CRISPR immunity of this unique immune system. The structure of the corresponding effector complex has been solved by the Cryo-EM technique. It represents the largest and most complicated effector complex amongst all CRISPR-Cas systems that have been analyzed thus far. Seven structures have been obtained for the Cmr-β effector complex in association with different substrates and ATP, and structural analyses of these enzyme-substrate complexes have yielded novel insights into the molecular mechanisms of the activation and regulation of the CRISPR immunity.

The research in Prof. She Qunxin’ group was supported by the National Transgenic Science and Technology Program, China, the Independent Research Fund Denmark-Natural Sciences, Denmark and the National Natural Science Foundation of China.