On October 28, the Opening Ceremony of Shandong National Center for Applied Mathematics and Forum for the Integrated Development of Mathematics and Industry was held in Jinan, Shandong Province. Peng Shigeand Guo Lei, both academicians of the Chinese Academy of Sciences, were appointed as the director and chairman of academic committee respectively. 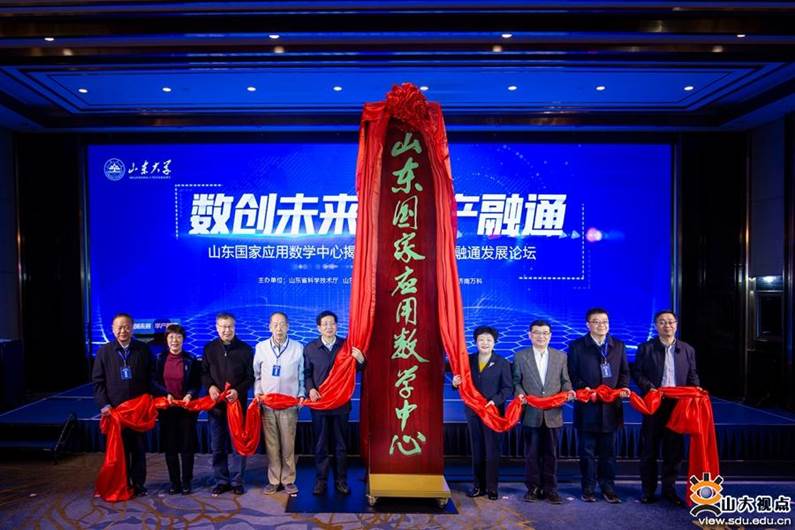 Sun Jiye, vice-governor of Shandong Province, said in his speech that the center will play an important role in enhancing the basic scientific research, promoting the substantial integration of mathematics and related fields, and replacing old growth drivers with new ones.

"In the future, we will put more emphasis on the allocation of innovative resources including platforms, talents and projects, for supporting the construction of the center, so that it could be developed into a world-renowned major original innovator as soon as possible." Sun emphasized.

Fan Liming, President of SDU, said in her speech that this center has highlighted the achievements made by SDU in developing mathematics, since it could promote the integration of demand chain, innovation chain, industrial chain, talent chain and education chain by providing more useful solutions for breaking through industry bottleneck. In the future, the center will vigorously build a platform for cross-research and collaborative innovation, introduce an organization system for interdisciplinary and cross-field research, and implement the talent mechanism characterized by innovation, inclusiveness, openness and shared development, so as to establish an internationally renowned highland for innovative talents in applied mathematics research.

At the meeting, academician Peng Shige signed cooperation agreements with Inspur, Haier and other corporations. Professor Chen Zengjing, executive deputy director of the center and dean of the School of Mathematics, signed cooperation agreements with relevant parties on the innovation and transformation base jointly built by SDU, Licheng District government and Jinan Vanke Group.

As is well known, this center, under the guidance of SDU, was listed in the first batch of 13 national applied mathematics centers.