Recently, the group of Professor Liu Xinyong from the School of Pharmaceutical Sciences of Shandong University published a research paper entitled "2,4,5-Trisubstituted Pyrimidines as Potent HIV-1 NNRTIs: Rational Design, Synthesis, Activity Evaluation, and Crystallographic Studies" in "Journal of Medicinal Chemistry" which is the top journal of medicinal chemistry. 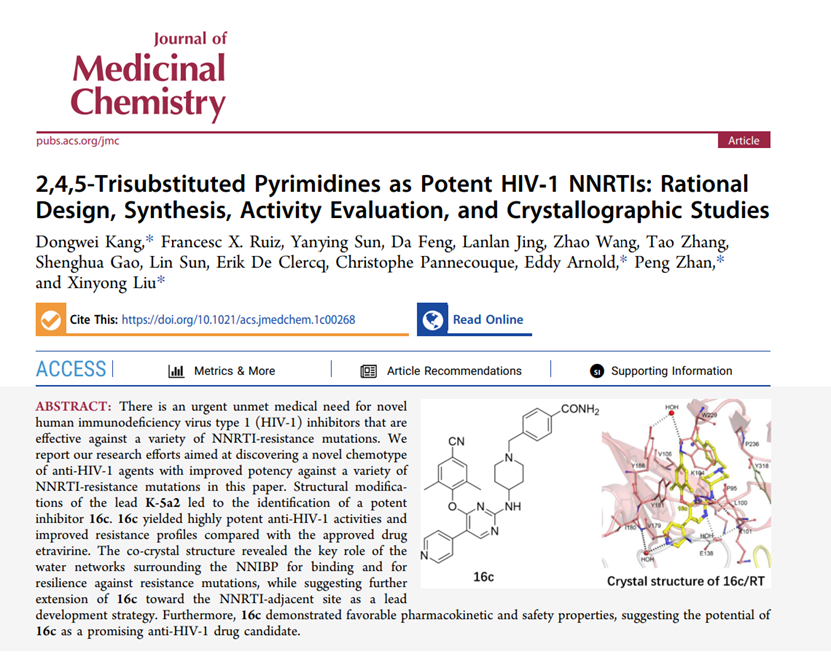 HIV-1 non-nucleoside reverse transcriptase inhibitors (NNRTIs) have gained a definitive place due to their unique antiviral potency, high specificity, and low toxicity in highly active antiretroviral therapy (HAART) used to treat HIV patients. However, HIV-1 exhibited various degree of drug resistance to existing NNRTIs, due to the genetic heterogeneity of HIV-1 and the high variability of the genome. In recent years, a variety of structural types of NNRTIs drug candidates have been reported successively at home and abroad, but the problem of drug resistance is still the main challenge for NNRTIs. In addition, poor pharmacokinetics and side effects are also problems to be solved for candidates. Therefore, the development of novel anti-AIDS drugs with potent activities and low toxicity has always been a research hotspot in this field.

On the basis of previous studies and the structure-activity relationship of DAPYs NNRTIs, Professor Liu Xinyong's group recently designed and synthesized a series of 2,4,5-trisubstituted pyrimidines as potent HIV‑1 NNRTIs, cooperating ith Professor Christophe Pannecouque from the Leuven University in Belgium and Professor Eddy Arnold from the Rutgers University in the United States. Several aromatic heterocycles were introduced to the C5 position of the central pyrimidines of the lead compound K-5a2 to get a deeper insight of the structure−activity relationships (SARs) of the NNIBP tolerant region II (Figure 1) to discover highly effective anti-drug resistant HIV-1 NNRTIs candidates. The results demonstrated that the compound 16c shows the most potent ant-HIV-1 activity, with the potency against wild strain (WT) and mutant strains (L100I、K103N、Y181C、Y188L、E138K、F227L/V106A and K103N/Y181C) being superior to ETR (EC50 = 3.74 - 22.4 nM). Moreover, 16c exhibits lower cytotoxicity (CC50 = 36.0 μM), which contributes to its higher SI values toward WT and mutant HIV-1 strains.

The crystal structure of HIV-1 RT in complex with 16c illustrates that 16c adopted a typically horseshoe-like conformation in the NNIBP. In addition to maintaining the classical interaction between the lead compound K-5a2 and NNIBP, the cyano group on the left wing of 16c also forms a water bridge-mediated hydrogen bond with Y188, and the N atom of the newly introduced 4-pyridyl substituent forms a water bridge-mediated hydrogen bond with I180. The hydrogen bond forces mediated by these water bridges can further improve the drug-resistance profiles of compound. More importantly, the co-crystal structure shows that the 16c pyridine ring extends through the NNIBP tolerant region II to another allosteric binding site (NNRTIs adjacent site，NNIAP) in RT, which provides structural biology basis for the design of novel “dual-site”-binding RT inhibitors. 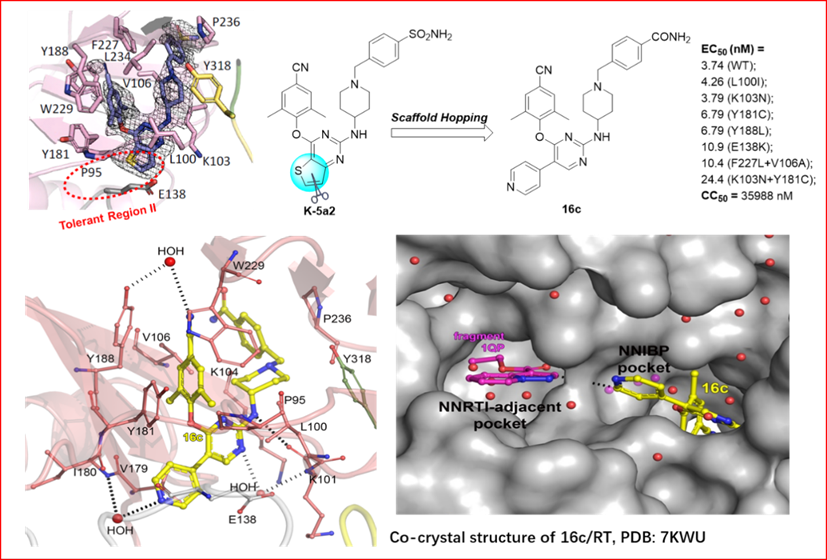 Figure 1. Discovery of 16c and the co-crystal structure of 16c/RT

In addition, in vivo pharmacokinetics study showed the Tmax was 1.0 h, the half-life (T1/2) was 2.46 h, and the oral bioavailability (F) was 15.3% in Sprague Dawley rats. The assessment of acute toxicity demonstrated that its LD50 > 2000 mg/kg. And the assessment of hERG activity showed that 16c exhibited an IC50 value of 1.19 μM and demonstrated much reduced QT liability and lower hERG inhibition in comparison with the lead K-5a2 (IC50 = 0.130 μM). So, 16c is a very promising anti-AIDS drug candidate.

The above research results have been published in J Med Chem, an authoritative journal in the field of medicinal chemistry of the American Chemical Society, researcher Kang Dongwei from the School of Pharmaceutical Sciences of Shandong University is the first author of this paper, and Professor Liu Xinyong , Professor  Zhan Peng and Professor Eddy Arnold are the co-corresponding authors of this paper. The research was supported from the National Natural Science Foundation of China and Shandong Provincial Key Research and Development Project.