On June 14th, the BESIII experiment reported the observation of the X(3872) → omega J/psi decay with more than 5 sigma confidence level for the first time. The relative decay rate for X(3872) → omega J/psi and pi+pi-J/psi is also measured. These results are published byPhysics Review Letters, an international peer reviewed journal with high recognition run by the American Physics Society. On behalf of the BESIII Collaboration, Prof.Liu Zhiqing, from the Institute of Frontier and Interdisciplinary Science, Shandong University (SDU) made a major contribution for this discovery.

In 1964, Gell-Mann and Zweig proposed the well-known Quark Model. It points out that hadrons are made of either three quarks or a pair of quark and anti-quark. However, Quantum Chromodynamics (QCD), the theory for describing the strong interaction, allows additional types of hadrons (also referred as exotic hadronic states) beyond the conventional Quark Model exist, e.g. multiquark state, quark-gluon hybrid state, hadronic molecule state and glueball etc. For several decades, the search for exotic hadrons beyond the quark model in experiment has been a challenge in the field of particle physics.

In 2003, the Belle experiment at KEK, Japan discovered a new particle called X(3872) in B meson decay. The anomalous properties of the X(3872) differ from conventional hadrons a lot, and thus it is believed to be a good candidate for an exotic hadronic state. Since the discovery of X(3872), particle physicists have done a lot of studies both theoretically and experimentally. In the earlier years, the Belle experiment in Japan and the BABAR experiment at Stanford Linear Accelerator Center in US has reported an evidence for the decay X(3872) → omega J/psi.

The BESⅢ experiment runs at e+e- center of mass energy between 2 and 4.6 GeV. In this energy region, BESIII has collected world’s largest scan data sets. In 2014, the BESⅢ experiment observed the e+e- → gamma X(3872) process, which might be produced via radiation transition from higher excited charmonium(-like) states and opens a new window for the study of X(3872). Using the radiation transition production approach, the SDU BESIII group has confidently observed the process of X(3872) → omega J/psi in experiment for the first time.

The measured relative decay rate between X(3872) → omega J/psi and pi+pi-J/psi(iso-spin violated process) is about 1.6, which means th ere is large iso-spin violation effect in theX(3872) decay and provides valuable information for understanding its inner structure and composition. Meanwhile, using the scanned data sets accumulated with BESⅢ, the energy dependent production cross section of e+e- → gamma X(3872) is also investigated. The results show a resonant structure Y(4200) with mass near 4.200 GeV, which is consistent with the previous Y(4220) structure observed in pi+pi-J/psi and pi+pi-hcprocesses by the BESIII experiment. 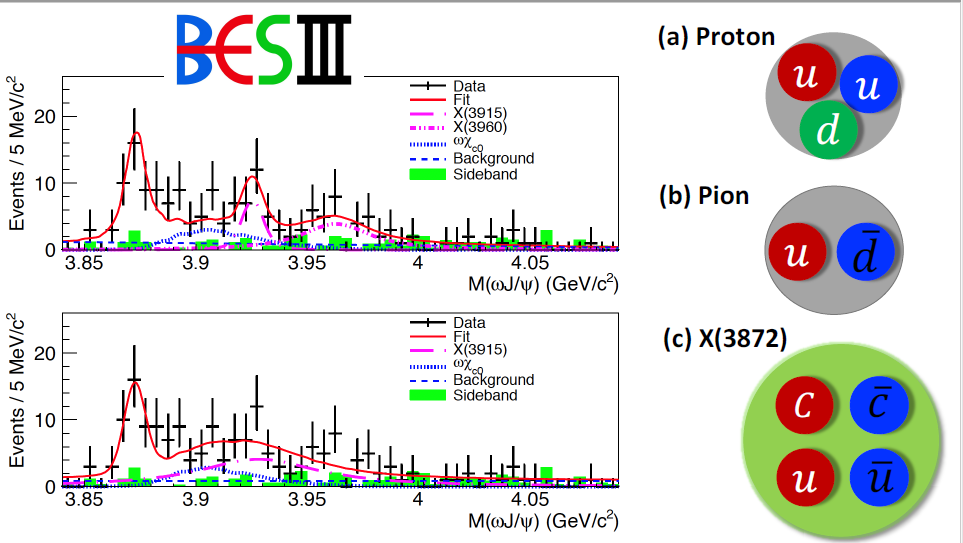 The BESⅢ experiment is the only tau-charm factory running in the world. About 500 scientists from 67 institutions in 14 countries participate in the BESⅢ experiment. Shandong University, as one of the first member of the BESⅢ experiment, has made important contributions to offline software and data analysis in BESIII.