Recently, a research article entitled "A GmSIN1/GmNCED3s/GmRbohBs Feed-forward Loop Acts as a Signal Amplifier that Regulates Root Growth in Soybean Exposed to Salt Stress" was published on the top journal The Plant Cell. Dr. Li Shuo is the first author; Dr. Wang Nan, Dr. Dandan Ji and Ms. Zhang Wenxiao are the co-first authors; Prof. Xiang Fengning is the corresponding author. The key laboratory of plant development and environmental adaptation biology and School of Life Sciences are the first corresponding institutions.

Soybean is a strategic economic crop in China and its import dependence ratio is higher than 85%. The trade war between China and U.S.A is aggravating the imbalance between soybean supply and demand and posing a threat to the food security of China. The soybean productivity and planting area are largely limited by the soil salinity. The key to resolve this problem is to identify effective gene targets for soybean salinity tolerance improvement.

Abscisic acid (ABA) and reactive oxygen species (ROS) act as key signaling molecules in the plant response to salt stress; however, how these signals are transduced and amplified remains unclear. Here, a soybean (Glycine max) salinity-induced NAC transcription factor encoded by SALT INDUCED NAC 1 (GmSIN1) was shown to be a key component of this process. Over-expression of GmSIN1 in soybean promoted root growth and salt tolerance and increased yield under salt stress; RNA interference-mediated knockdown of GmSIN1 had the opposite effect. 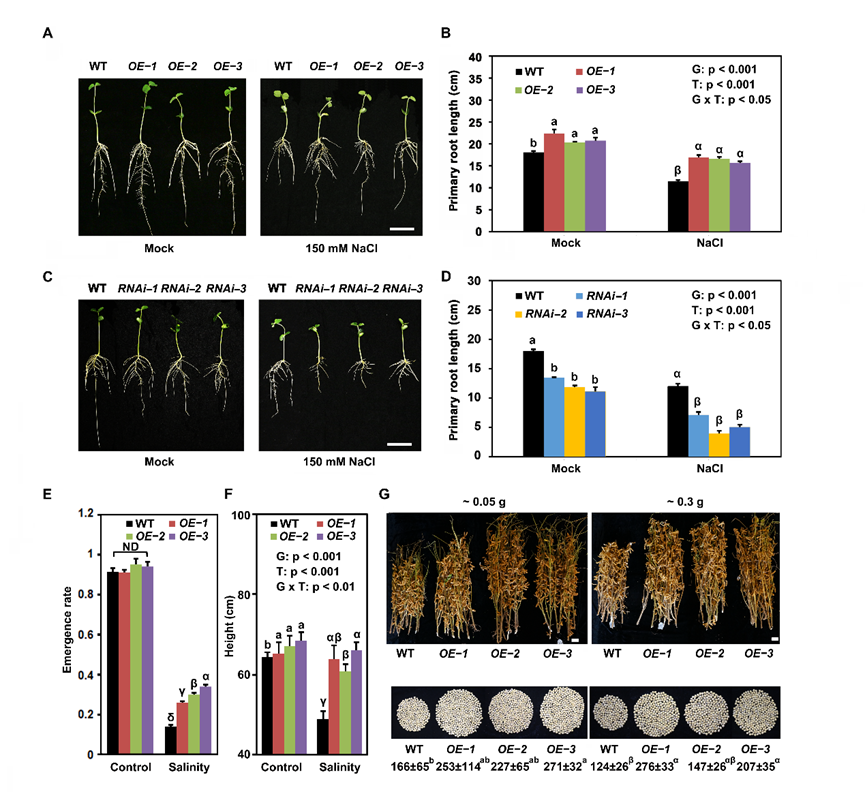 GmSIN1improves the salinity tolerance in soybean

The rapid induction of GmSIN1 in response to salinity required ABA and ROS, and the effect of GmSIN1 on root elongation and salt tolerance was achieved by boosting cellular ABA and ROS contents. GmSIN1 up-regulated GmNCED3s (9-cis-epoxycarotenoid dioxygenase coding genes in soybean, associated with ABA synthesis) and GmRbohBs (Respiratory burst oxidase homolog B genes in soybean, associated with ROS generation) by binding to their promoters at a site that has not been described to date. Together,GmSIN1,GmNCED3s, and GmRbohBs constitute a positive feed-forward system that enables the rapid accumulation of ABA and ROS, effectively amplifying the initial salt stress signal. These findings suggest that the combined modulation of ABA and ROS contents enhances soybean salt tolerance. 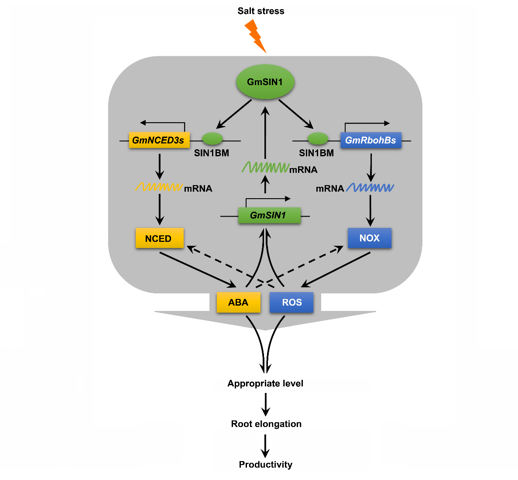 This research was financially supported by the National Key Research and Development Program of China, National Natural Science Foundation of China National Transgenic Project of China, etc.. Prof. Xiang's group has been committed to the identification of salt/drought stress related genes and the genetic engineering breeding in soybean for years. They have found numbers of potential gene targets that could be used in soybean salinity or drought tolerance improvement（Plant Physiology，2016；Plant Cell and Physiology,2017）.