On November 21, at the 8th International Conference on Welding Science and Engineering opened in Osaka, Japan, the awarding ceremony of the Pioneers Award in Computational Welding Science and Engineering (CWSE) was held. Professor Wu Chuansong, School of Materials Science and Engineering, Shandong University, is the only winner of this Award at this conference for his outstanding and pioneering contributions to computational welding science and engineering. Yukio Ueda, the founder of computational welding mechanics in the world, the President of CWSE Pioneers Award Foundation and Emeritus Professor of Osaka University, Japan, presented a medal to Professor Wu Chuansong, and Ninshu Ma, the Chairman of CWSE Pioneers Award Selection Committee and Professor of Osaka University, Japan, presented a prize to Professor Wu Chuansong. 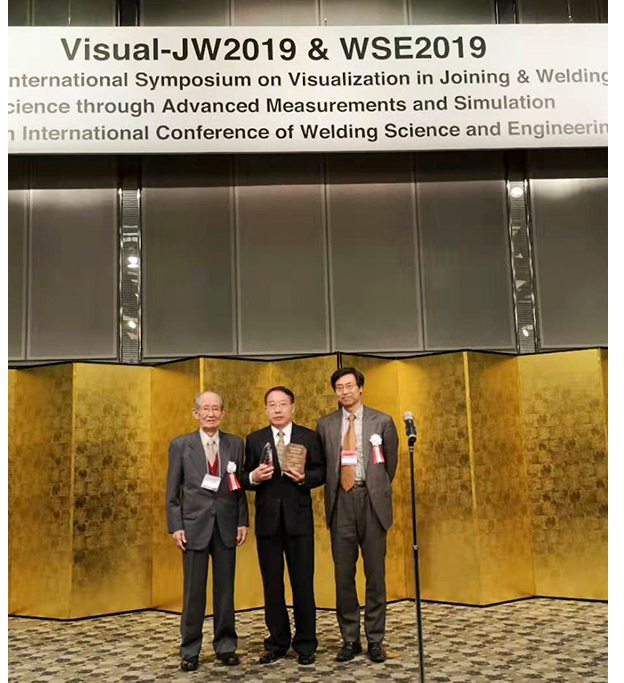 In 2011, two pioneers of computational welding science and engineering, Ueda, an emeritus professor of Osaka University in Japan and Goldak, an emeritus professor of Carlton University in Canada, initiated the Foundation and Selection Committee of the Pioneers Award for Computational Welding Science and Engineering. Every two years, one scholar who has made outstanding contributions and achievements in this field will be selected and awarded the Pioneer Award, and the winner will be announced and awarded at the Biennial International Conference on Welding Science and Engineering. So far, five welding experts from Japan, the United States and China have won this academic award.

Professor Wu Chuansong began to enter the field of computational welding science and engineering under the guidance of his tutor in 1981. He has made continuous research in this field for decades and has made outstanding academic achievements internationally recognized. In 2017, he was elected as the Fellow of American Welding Society. The speech of the Pioneers Award Selection Committee remarked: "Professor Wu Chuansong has been engaged in the research of multi-physical field models of various welding processes for a long time, and is a pioneer and leading expert in this field. He has developed a series of models to accurately describe the coupling mechanisms of multi-physical fields in welding, revealed the mechanism of welding processes, and enriched the knowledge base of welding science and technology. Based on the complete mastery of the underlying physical mechanisms with the process models, he developed a series of innovative process variants for traditional welding methods, and made outstanding contributions to the welding academia and industry in improving the welding productivity and weld quality.”