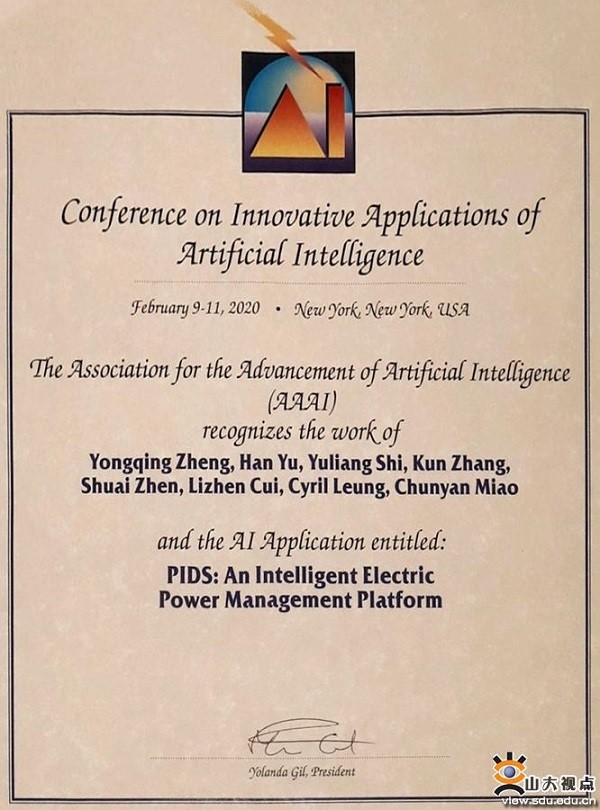 Dareway Software Co affiliated with Shandong University (SDU) won an award at the 34th Conference on Innovative Applications of Artificial Intelligence held in New York, the United States from Feb 9 to 11.

PIDS is an electric power management platform that helps ensure a stable supply of electric power through the use of big data based on the actual power consumption of users. The platform is currently managing one-eighth of all electricity consumption nationwide.

Dareway has been cooperating with C-FAIR since 2018. This is the second time in the past three years that the two parties have worked together to win the award. The team, headed by Professor Zheng Yongqing, the company's president, has also won the award twice.

SmartHS, a smart human resources and social security platform co-developed by the two parties, won the AAAI award in 2018 and has since been widely used to improve local government services in China.

Officials said the achievements resulted from an in-depth integration of academic research and commercial applications and should enhance SDU's international clout in the field of AI. In the future, Dareway plans to further promote international cooperation and contribute to the high-quality development of Jinan and Shandong province.

The Association for the Advancement of Artificial Intelligence (AAAI) holds an annual meeting every February. At this year's event, 11 innovative application awards were handed out to industrial leaders, including Alibaba, WeBank, Amazon, and IBM.